STORMS OF MY GRANDCHILDREN 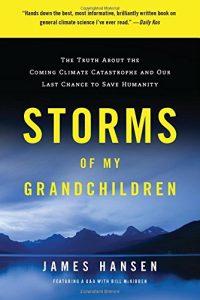 In his Q&A with Bill McKibben featured in the paperback edition of Storms of My Grandchildren, Dr. James Hansen, the world’s leading climatologist, shows that exactly contrary to the impression the public has received, the science of climate change has become even clearer and sharper since the hardcover was released. In Storms of My Grandchildren, Hansen speaks out for the first time with the full truth about global warming: The planet is hurtling even more rapidly than previously acknowledged to a climatic point of no return. In explaining the science of climate change, Hansen paints a devastating but all-too-realistic picture of what will happen in our children’s and grandchildren’s lifetimes if we follow the course we’re on. But he is also an optimist, showing that there is still time to take the urgent, strong action that is needed- just barely.