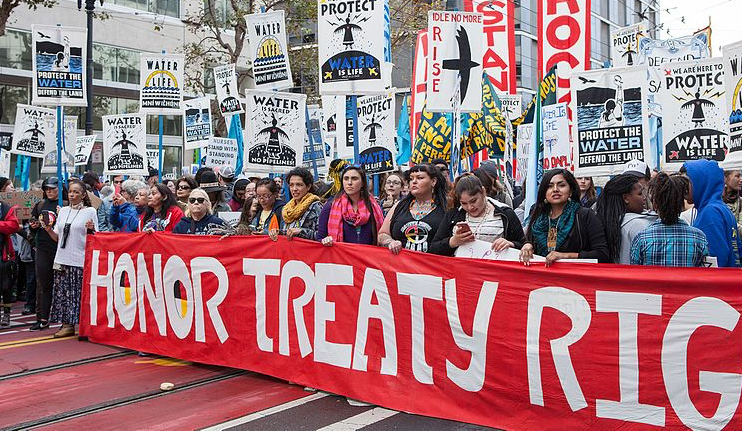 We live in trying times. The climate is in despair. Biodiversity is plummeting. Forests are disappearing at disturbing rates. Corporations are making profit at the expense of our communities, both ecologically and socially speaking. Income disparity is increasing precipitously. And, the political arena within the United States seems more lost than ever. Fortunately, there are individuals today who are standing up for their rights to a clean environment and their future way of life. Specifically, the indigenous people of the world have been quietly, and not so quietly, protesting destructive developments the world over. As Naomi Klein so eloquently points out in This Changes Everything, the indigenous peoples of the world are at the frontlines of combating ecological and social destruction. They (indigenous peoples of the Americas) have been resisting what Wendell Berry calls the “exploitive” mindset since the arrival of Columbus roughly 524 years ago and they are valiantly continuing that effort today.

The Dakota Access Pipeline and the indigenous resistance that has manifested in North Dakota, with its epicenter at the Oceti Sacowin camp, is a profoundly important example of how indigenous peoples are fighting for environmental and social justice for all. For those who do not know, the Dakota Access Pipeline is being constructed alongside the Standing Rock Sioux Tribe’s reservation (although, before the U.S. declared emanate domain in the 1950’s, the land on which the pipeline is being constructed was considered tribal land, according to the Fort Laramie Treaty of 1851). As the pipeline continues on its impending path towards completion, it is a shining example of how the U.S. government continues to ignore past treaties and the rights of indigenous peoples by placing private interests above public health. For instance, in early September, the construction of the pipeline destroyed, according to court filings, roughly 27 graves, 16 stone rings, and 19 effigies, all cultural vestiges of the Standing Rock Sioux Tribe – an action that federal law does not permit. Yet the 1,172 mile long pipeline, which will facilitate the movement of half a million barrels of climate altering oil per day from the Bakken oil fields to Illinois, is still under construction.

At present, the Army Corps of Engineers is assessing whether or not other potential routes exist for the pipeline that would sidestep the reservation; however, they have given no timetable for their decision on the matter. Meanwhile, development of the pipeline on private lands continues. If the Army Corps of Engineers decision is delivered after Donald Trump is sworn into the oval office on the 20th of January, there is significant evidence to suggest that the pipeline will continue as originally planned. Mr. Trump’s platform is highly pro fossil-fuel development oriented; according to his official website, he is going to “unleash America’s $50 trillion in untapped shale, oil, and natural gas reserves, plus hundreds of years in clean coal reserves.” Accordingly, because 1) the President-elect stands to gain from the completion of the pipeline financially, and 2) the pipeline is consistent with his energy development plan, it is likely that he will not only allow its development, but actively campaign for its completion.

What We Are Looking For:

Therefore, it is imperative that individuals, organizations, and companies who are concerned about the well-being of our planet and our communities provide immediate support to the brave warriors peacefully protesting the development of the Dakota Access Pipeline before it is too late. One simple way concerned individuals can help is by providing warm weather clothing and sleeping gear to the peaceful warriors of Oceti Sacowin camp. The North Dakota winters can be frigid with average high temperatures in the low 20’s. Estimates suggest that at least 350 individuals have committed to staying through the winter, while other reports suggest more would stay if they had the appropriate clothing and sleeping gear. Thus, it would be sincerely appreciated if concerned individuals donated all sizes of warm-weather clothing, such as beanies, gloves, socks, jackets, pants, and undergarments. In addition, any sleeping bags, blankets, and sleeping pads would also be appreciated.

Additionally, the 350 water protectors deserve wholesome and culturally appropriate food. Thus, it would be sincerely appreciated if individuals could donate either non-perishable foods (must be able last transport without refrigeration) or a monetary donation, which will be used to purchase organic foodstuffs (100% of all funds donated will be allocated for the purchasing of foods, and nothing else). Your consideration of this request would be sincerely appreciated. Time is of the essence for the Standing Rock protests in order to keep pressure on the developers of the pipeline going into the winter. Accordingly, we are hoping to deliver all donations by December 3rd.

The Pax Natura Foundation is a U.S. recognized 501(c)(3) non-profit corporation, seeking to promote peace with nature through conservation and education efforts world-wide. To achieve this goal, we have worked with the Costa Rican government over thepast two decades on avoided deforestation programs, especially their highly successful Payment for Environmental Services (PSA) program. Furthermore, our work has also encompassed efforts to increase awareness concerning the negative impacts of transgenic crops by promoting, along with our Foundation Chair, Dr. Jane Goodall, the new book, “Altered Genes and Twisted Truth” by Dr. Steven M. Druker. This book, through it’s promotion by Pax Natura Foundation, has succeeded in casting a shadow over the claims of the bio-tech industry and has resulted in a number of countries banning the production of transgenic crops nationwide.

What We Are Going To Do:

With your most kind support of this important endeavor, our organization will pay for the transportation and delivery of all goods to the Oceti Sacowin camp in south central North Dakota. Furthermore, one of our representatives will make certain that all goods are handed out to individuals actively protesting, rather than to bystanders. Additionally, we will work to publicize all donations by documenting the process via social media and posting information on our website: www.paxnatura.org

Please send donations to the following address or we would be happy to pick up at any of your store locations in the Salt Lake City and Denver regions: