You can buy Steven Druker’s book on Amazon. As well as being important, it’s a great read.

EXCERPT: Druker has, without doubt, written one of the most important books of the last 50 years; and I shall urge everyone I know, who cares about life on earth, and the future of their children, to read it. 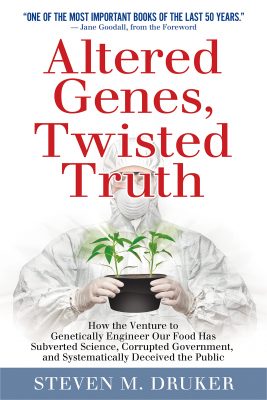 * The history of genetically modified food has been one of systematic deception and fraud by corporations, scientists, media, and regulators, Steven Druker writes in his remarkable new book. Jane Goodall finds the story by turn fascinating, chilling, distressing and ultimately, hope-inspiring

I well remember how horrified I felt when I learned that scientists had succeeded in reconfiguring the genetics of plants and animals.

The first genetically engineered (GE) plants were created in the 1980s, but I did not hear about them until the 1990s when they were first commercialized.

It seemed a shocking corruption of the life forms of the planet, and it was not surprising that many people were as appalled as I was – and that these altered organisms became known as “Frankenfoods”.

In fact, there were good science-based reasons to mistrust the new foods; yet GE crops have spread throughout North America and several other parts of the world. How has this come about?

A fascinating story – and a chilling one

The answer to that question is to be found in Steven Druker’s meticulously researched book. Several years in the making, it is a fascinating, if chilling, story.

I did not realize what a formidable task the bioengineers faced as they struggled to introduce new genes into a variety of agricultural crops. Their intent was to make them produce toxins that would deter insect pests, or enable them to resist herbicides, and so on.

A major challenge was the need to overcome the various defensive mechanisms of the plants themselves, which did their best to repel the alien material. Another was to compel the foreign genes to function in a new cellular environment where they would ordinarily remain dormant. It is a testament to human persistence and ingenuity that the scientists finally succeeded!

But the reconfigured plants they eventually created were, as Druker explains in engaging detail, different in a variety of ways from their parents. And from the outset many qualified scientists expressed concerns about the safety of the new crops for both the environment and human and animal health.

He further demonstrates that this very real difference between GE plants and their conventional counterparts is one of the basic truths that biotech proponents have endeavored to obscure.

As part of the process, they portrayed the various concerns as merely the ignorant opinions of misinformed individuals – and derided them as not only unscientific, but anti-science.

Engineering “consensus” – where none exists

They then set to work to convince the public and government officials, through the dissemination of false information, that there was an overwhelming expert consensus, based on solid evidence, that the new foods were safe. Yet this, as Druker points out, was clearly not true.

As the chapters progress, we read how the advocates of genetic engineering have steadfastly maintained that the crops created by this radical technology are essentially similar to those from which they have been derived, that the process is splendidly exact, and that GE foods, therefore, are, if anything, safer than their traditionally-bred “parents”.

In fact, there’s significant dissimilarity, the process is far from exact, and the risks are greater, especially the risk of creating unexpected toxins that are difficult to detect.

Druker describes how amazingly successful the biotech lobby has been – and the extent to which the general public and government decision makers have been hoodwinked by the clever and methodical twisting of the facts and the propagation of many myths.

Moreover, it appears that a number of respected scientific institutions, as well as many eminent scientists, were complicit in this relentless spreading of disinformation.

US Food and Drug Administration – ignorance or corruption?

Chapter 5 shows how the key step in the commercialization of GE foods occurred through the unbelievably poor judgment – if not downright corruption – of the US Food and Drug Administration (the FDA).

This regulatory body is supposed to ensure that new additives to foods are safe before they come to market, and it had a responsibility to require that GE foods were proven safe through standard scientific testing.

But the information that Druker pried from the agency’s files through a lawsuit revealed that it apparently ignored (and covered up) the concerns of its own scientists and then violated a federal statute and its own regulations by permitting GE foods to be marketed without any testing whatsoever.

The evidence further shows how the agency assured consumers that GE foods are just as safe as naturally produced ones – and that their safety has been confirmed by solid scientific evidence – despite the fact it knew that no such evidence existed.

Druker makes the case that it was this fraud that truly enabled the GE food venture to take off. And he asserts that the fraud continues to deceive the public and Congress, despite the fact that the lawsuit he initiated thoroughly exposed it. His description of the proceedings surrounding this lawsuit was, to me, one of the most astounding and chilling parts of the book.

The media too did their job – suppressing the truth

And what of the role of the media? How has the American public been so largely kept in the dark about the realities of GE foods – to the extent that until quite recently, a vast majority of the populace did not even know they were regularly consuming them?

Druker describes, in Chapter 8, how the mainstream media have been highly selective in what they report – and have consistently failed to convey information that would cause concern about these engineered products. Moreover, Druker demonstrates that the policies imposed by the media magnates have been, in his words, “not merely selective, but suppressive”.

And he relates several dramatic incidents in which journalists who tried to bring unsettling facts to light had their stories altered or totally quashed by higher level executives. So it is not surprising that the American public, and a good many key decision makers, believe that there are no legitimate concerns regarding GE foods.

I am personally grateful to Steven Druker for writing this book. It has been a monumental task and reflects the passionate desire of a man with a true scientific spirit to reveal, as precisely as possible, the truth behind the misrepresentations of the truth.

Nonetheless, despite its integrity, “Altered Genes, Twisted Truth” can be expected to meet fierce criticism from those who promote the GE food venture; and, like all who attempt to disclose the venture’s underside, its author will probably be attacked and branded as anti-science and anti-progress.

But it seems to me that it is not those who point to the problems of the venture who are anti-science; it is quite the other way around. Nevertheless, Druker will almost surely be subjected to the same sort of criticisms as those leveled against Rachel Carson when she published Silent Spring in 1962.

I think it is important that you read this book carefully, assessing for yourself how firmly it is grounded in fact and logic. You may well come to the same conclusion as I have: that Steven Druker is upholding the tradition of good science.

Then read some of the books and articles written by pro-GE scientists – especially some of those by prominent biologists – and you may well decide that their standards often fall significantly short of his.

In fact, he points out several instances in which it appears that such publications are downright deceptive, not only portraying genetic engineering in a misleading manner, but even misrepresenting some basic features of biology.

Further, although these scientists may genuinely believe that GE foods are the solution for world hunger, it appears that many of them have vastly overestimated the benefits of these foods – and that even if these products did not entail higher risks, it’s doubtful they could significantly reduce malnutrition or solve any major problems of agriculture.

Although this book tells a story that’s in many ways distressing, it’s important that it has finally been told because so much confusion has been spread and so many important decision-makers have apparently been deluded.

A final message of hope and life-affirming solutions

Fortunately, the final chapter shows how the story can have a happy ending, and it clearly points the way toward realistic and sustainable solutions that do not involve genetic engineering.

Thus, just as my own books aim to instill hope, this book is ultimately a hope-inspiring one too. For it describes not only some of the mistakes that we have made but how they can be rectified in creative and life-supporting ways.

Druker has, without doubt, written one of the most important books of the last 50 years; and I shall urge everyone I know, who cares about life on earth, and the future of their children, and children’s children, to read it.

It will go a long way toward dispelling the confusion and delusion that has been created regarding the genetic engineering process and the foods it creates. To me, Druker is a hero. He deserves a Nobel Prize – at least!
—
The Book: “Altered Genes, Twisted Truth” by Steven Druker.

Jane Goodall is a primatologist, ethologist, anthropologist, and UN Messenger of Peace. She is the founder of the Jane Goodall Institute and the Roots & Shoots program, and she has worked extensively on conservation and animal welfare issues. She has served on the board of the Nonhuman Rights Project since its founding in 1996.

This article was originally published as Foreword to “Altered Genes, Twisted Truth” by Steven Druker.