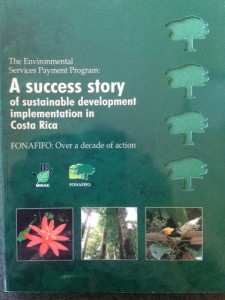 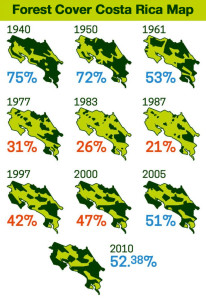 Costa Rica, itself a founder of the United Nations Framework Convention on Climate Change (UNFCCC), has been a leader in establishing and defining a category of environmental services well ahead of other global efforts such as the Kyoto Protocol. Costa Rican citizens have taken bold action to protect their natural heritage. Theirs was the first tropical nation where a network of government and non-government organizations joined forces to establish 28 national parks and reserves creating a comprehensive national park system in this tiny country.

Extraordinary for a developing country, Costa Rica has created a self-financed system of fees imposed primarily on fossil fuels that help support payments to farmers and landowners for preserving private forest land. While providing such locally valuable services as watershed protection, flood control and maintenance of scenic beauty, these protected forests preserve the country’s incomparable and priceless biodiversity and also trap vast amounts of carbon—far more than Costa Rica itself pumps into the planetary atmosphere.

Such “carbon sequestration” is yet another environmental service, in this case, most valuable to those internationally who produce more carbon than they can sequester themselves. The burgeoning international exchange system whereby foreign buyers might pay tropical countries for forest carbon sequestration is assuring an economic motive for preserving and replanting forest lands while providing an environmental service with global impact. While the international system for such carbon emission trading credits is still in its infancy, with issues of valuation and verification still unresolved in most tropical areas, Costa Rica’s pioneering role in the market, stable government, scientific sophistication and domestic experience have established a reliable system of administration, guarantee and enforcement for these credits. This system, the National Fund for Forestry Finance, whose Spanish acronym is FONAFIFO, was established 20 years ago under Costa Rica’s forestry reforms and during that period has been responsible for the preservation and reforestation of almost a quarter of Costa Rica’s land area. Its ground-breaking Payment for Environmental Services (PES) Program (Program) has been in full operation for the last 10 years and is widely recognized as being single-handedly responsible for this unparalleled success. Foreign institutions, primarily European power utilities and some governments, have already purchased carbon offsets from Costa Rica.

FONAFIFO’s PES Program is so successful and so well received that there is a long waiting list of Costa Rican landowners willing to participate. Costa Rica’s own limited domestic resources derived from its self-imposed carbon tax have so far prevented the program’s further expansion. At the suggestion of the Pax Natura Foundation, FONAFIFO is now looking to “export” this valuable carbon sequestration service, the earnings from which will allow the PES Program to expand to meet its potential for both the nation and the world.

The PES Program is credited with stopping the destruction of the Costa Rican rain forest and recapturing 26 percent of the country’s land-mass-to-forest cover from 1987 to 2000. To date the Program has benefited more than 7,000 small-to medium-scale private land owners for the environmental services their property provides for watershed protection, scenic beauty, biodiversity conservation, and carbon sequestration. In essence, the Program recognizes the economic and spiritual value of intact forests versus forests cleared for cattle pasture or other purposes.