Life is a Miracle 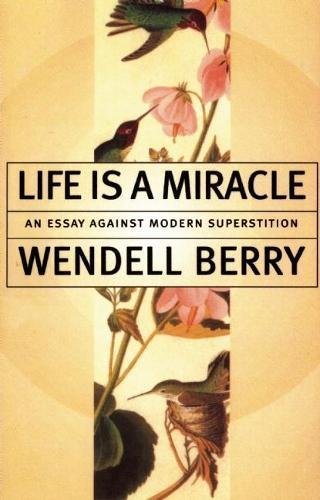 A strong polemic, in which Berry (Another Turn of the Crank, 1995, etc.) takes a wrecking ball to E.O. Wilson’s Consilience, reducing its smug assumptions regarding the fusion of science, art, and religion to so much rubble.

Berry does not see life as mechanical or predictable or understandable, and he does not believe it possible to reduce it to the scope of our understanding. This would be to “give up on life, to carry it beyond change and redemption, and to increase the proximity of despair.” For Berry, “life is a miracle” (as Edgar said to King Lear), and it is not containable in Wilson’s empiricism or his reductionism or his subordination of art to science—particularly as Berry sees science currently under the sway of corporate interests. Berry advocates intellectual standards that “shift the priority from production to local adaptation, from power to elegance, from costliness to thrift. We must learn to think about propriety in scale and design.” Despite Wilson’s “pretensions to iconoclasm,” Berry sees orthodoxy and the hand of politics: “for the putative ability to explain everything along with the denial of religion (or the appropriation of its appearances) is a property of political tyranny.” The obtuse nature of the scientific attitude is crudely suggested in Berry’s caricature of Wilson responding to the prophet Isaiah in the following dialogue: “The voice said, Cry. And he said, What shall I cry? All flesh is grass, and all the goodliness thereof is as a flower of the field.” To which Wilson replies, “But, sir! Are you aware of the existence of the electromagnetic spectrum?” Somewhat lame, to be sure, but it illustrates Berry’s point: “I have been trying to learn a language particular enough to speak of this place as it is and of my being here as I am. . . . And then is when I see that this life is a miracle, absolutely worth having, absolutely worth saving.”