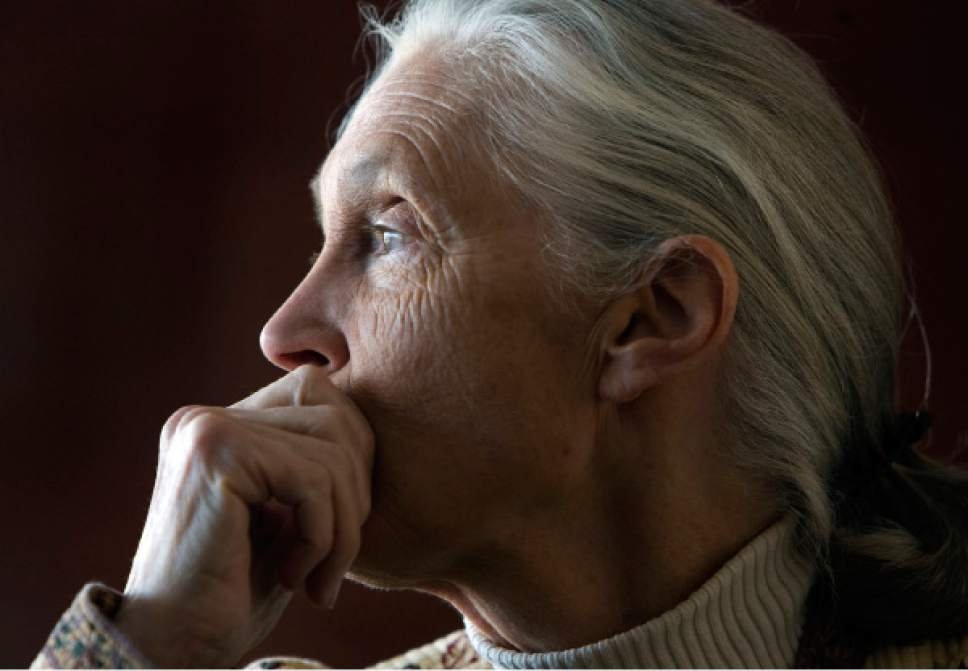 Salt Lake City – British primatologist and anthropologist Dr. Jane Goodall, who spent parts of 40 years of her life among a chimpanzee colony in Tanzania, looks out a window at the University of Utah Museum of Fine Arts after speaking to children about the world’s environmental problems, threats to animals species, her own pioneering work, and the work of local children in her “Roots & Shoots” program Monday March 3, 2008. Steve Griffin/The Salt Lake Tribune) 3/3/08t’s awkward — kind of like inviting a friend to a party who spends half her time talking to someone else.

University of Utah administrators, playing host Friday to acclaimed primatologist Jane Goodall, are trying — quietly — to draw a clear line between the scientist’s sold-out lecture on conservation at the downtown City Creek Marriott and an anti-GMO news conference she has scheduled with an author earlier in the day.

Goodall’s life’s work, including decades of groundbreaking research on chimpanzees, would be reason enough to invite her to Utah to speak.

But her new avocation — denouncing genetically modified foods (GMO) — has made the choice more controversial. She was accused of plagiarism in writing her 2013 book “Seeds of Hope” — lifting parts from websites and interviews she didn’t conduct — and her publisher ended up re-releasing the title in 2014.

That literary misstep does not diminish 81-year-old Goodall’s legacy or the value of her speech, said Jeff McCarthy, director of the U.’s environmental humanities program.

Her impact “is so much bigger than any one small controversy,” McCarthy said, stressing that “the general thrust of her interaction with the world has been in her role as an environmental advocate, a peace activist and someone who encourages us to care deeply about animals.”

Goodall’s visit to Utah was months in the making. The last time she spoke at the university was in 2008. Last year, administrators invited the British scientist to speak again.

Her appearance with anti-GMO activist and attorney Steven Druker was scheduled much later.

“I just look at it as a golden opportunity to come to the place where she’s going to be and give a press conference on the same day,” Druker said Thursday. “She’s so concerned about this issue and believes my book can play a major role about turning this around.”

Goodall also consulted him for a chapter of her “Seeds of Hope,” he said.

Druker is the author of the newly released “Altered Genes, Twisted Truth: How the venture to genetically engineer our food has subverted science, corrupted government and systematically deceived the public,” and says that studies on animals and contaminated supplements show there is cause to believe modified seed strains do more harm than good.

Goodall wrote a forward for the book, praising it as “without doubt, one of the most important books of the last 50 years,” according to Salt Lake City-based Clear River Press, which published it.

She will appear with Druker in the afternoon for a news conference at the University Guest House.

Goodall is also scheduled to talk Friday to about 300 schoolchildren at the Salt Lake Center for Science Education.

At 7 p.m., she will take the podium for the university, which has split the cost of Goodall’s visit with other organizations. Utah-based environmental foundation Pax Natura is renting space on the U. campus for the afternoon news conference, which is separate from the university lecture, said U. spokeswoman Jana Cunningham.

Pax Natura also is a sponsor of the evening speech, footing $20,000 of the $50,000 bill, said Heidi Camp, assistant dean of the U.’s College of Humanities. The remaining $5,000 comes from private donors.

Cunningham and McCarthy said the university does not expect Goodall’s evening speech to touch on her recent work to end the use of genetically altered crops.

But the much-debated subject isn’t off the table, said Jacob Petersen, outreach coordinator for the Jane Goodall Institute. “Her talk mainly goes into her life” and work with chimpanzees, but also details her conservation efforts in Tanzania’s Gombe Stream National Park and development initiatives in other central and east African nations, Petersen said. The specific subject matter varies from town to town.