I truly believe we’re poisoning ourselves 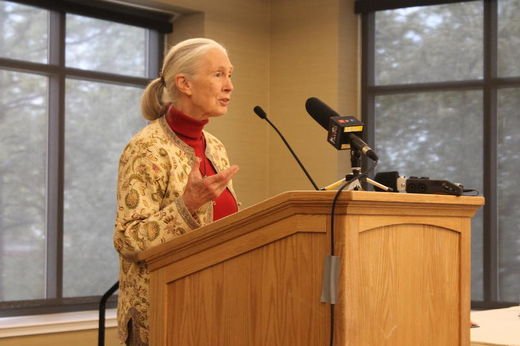 Primatologist Jane Goodall was speaking in Salt Lake City at a sold-out event Friday evening about her work and the future of chimpanzees. But in the afternoon, she lent her fame and clout to a more controversial cause. Goodall appeared with Steven Druker, the author of a book that aims to wipe out genetically modified organisms from the world’s food supply.

In a talk sponsored by the Pax Natura Foundation, Jane Goodall thanked Steven Druker for writing his book, Altered Genes, Twisted Truth. She herself wrote the forward and she said the book substantiated her concerns that genetically engineered foods were dangerous.

“We’re poisoning the land, we’re poisoning animals, and I truly believe we’re poisoning ourselves,” Goodall said. She pointed to superbugs that have become resistant to pesticides, weeds resistant to herbicides, and isolated animal studies in Europe and Australia where she said rats and pigs suffered from a variety of health issues when consuming genetically engineered crops.

Randy Parker, CEO of the Utah Farm Bureau Federation, says Goodall and Druker are doing a disservice to the people of Utah and around the world.

“To me this is all about extremism and scaring people,” Parker says. He says without genetically modified crops, we would not have the levels of food productivity that we have today.

Comment: Oh please! Talk about using ‘extreme scare tactics’ to get consumers to accept GMO food! Read more about the fallacy of feeding the world with biotech/industrial based agriculture: Debunking the myth: ‘We need GMOs to feed the world‘

“I’ve never heard in all of the literature that I’ve reviewed of one single case of a GMO related plant or animal causing a health problem for a human being or for an animal for that matter,” he says. “I think this is an activist, radical viewpoint.”

Comment: Really?! Randy Parker must not have read ALL of the literature. The following articles were written by author and researcher Jeffery Smith; director of the Institute for Responsible Technology, he has some pretty damning evidence to counter the whole ‘GMO’s are safe argument’:

The 80-year-old Goodall apologized at the end of her talk for a few stumbles where she lost her train of thought, but she says she’s hopeful that as the young people of today become more aware of the dangers of genetic engineering, they will eliminate GMO’s from the food supply.