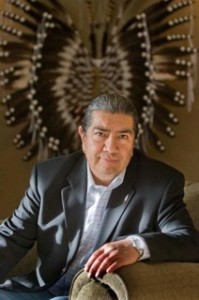 Forrest S. Cuch is an enrolled member of the Ute Indian Tribe. He was born in 1951 and raised on the Uintah and Ouray Ute Indian Reservation in northeastern Utah. In 1973, he graduated from Westminster College with a Bachelor of Arts Degree in the Behavioral Sciences.  During his 38 year career, Forrest has held many challenging jobs beginning as education director for the Ute Indian Tribe. He has also served as tribal planner/administrator for an eastern tribe and social studies department head and teacher for his alma mater, Wasatch Academy, Mt. Pleasant, Utah. Forrest was executive director, Utah Division of Indian Affairs.

During this time, he published, A History of Utah’s American Indians, Utah State University Press, 2000. He has served on numerous boards including as a trustee representing American Indians on the Salt Lake Organizing Committee for the 2002 Winter Olympic Games; trustee for Swaner Preserve; and Salt Lake City based Pax Natura. Forrest played a key role in the PBS/KUED sponsored curriculum project entitled; We Shall Remain, which features a video series of the histories of the Utah tribes with accompanying materials. In 2012, he served as CEO for the Ute Tribe’s business enterprises. Forrest is Co-Founder of Rising American Indian Nations (RAIN), an Indian operated non-profit organization established to empower American Indian people.  Throughout his career, he has worked to call attention to the ancient presence of American Indian people in the intermountain west, and he has worked with other American Indian leaders in and out of state to address many critical issues facing all American Indians. He currently is engaged in working with spiritual leaders through the Western Hemisphere to usher in the new shift in feminine conscious known of as the New Earth and calling attention to Climate Change and Harm to Mother Earth.