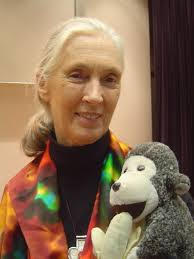 Jane Goodall, in full Dame Jane Goodall, is a British ethologist, best known for her exceptionally detailed and long-term research on chimpanzees of Gombe Stream National Park in Tanzania. The University of Cambridge in 1965 awarded Jane Goodall a Ph.D. in ethology (the study of animal behavior). She founded the Jane Goodall Institute in 1977 to continue her research, and establish projects to help improve human communities in the countries where there are the highest concentrations of chimpanzees. In 1991 Dr. Jane Goodall founded Roots and Shoots, a global youth service program, helping young people around the world to become compassionate leaders, and to develop the behaviors and attitudes to be good stewards of the environment. In 2002, United Nations Secretary-General Kofi Annan appointed Dr. Goodall to serve as a United Nations Messenger of Peace. Dr. Jane Goodall was made a Dame of the British Empire (D.B.E.) on February 20, 2004 during a ceremony at Buckingham Palace in London, and in 2006, she received the French Legion of Honor, presented by the Prime Minister Dominique de Villepin, as well as the UNESCO Gold Medal Award. More about Jane Goodall