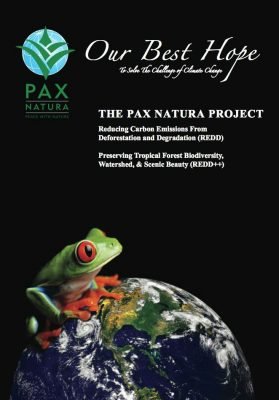 After decades of deforestation, Costa Rica had lost over half of its forest cover and by 1987 had only 21% remaining. Fearing the loss of the country’s watershed protection that the forest provides, the Costa Rican government began implementing a series of forestry reforms that culminated in an Environmental Services Payment Program known as the Pago de Services Ambientales (PSA). This PSA program was the world’s first Reduced Emissions from Deforestation and Degradation program, targeting small to medium-size land owners with forest cover over a significant portion of the land.

Like any such ambitious and innovative project, it was bigger than just one political administration. Pax Natura has been a proud partner for over 30 years, since nearly the beginning. Here is the story of our involvement.

Under the Kyoto Protocol, an important attempt was made to address the inequalities of carbon emissions in developed (emitter) nations versus developing (non-emitter) nations. This led to the development of the carbon market, through the cap and trade system.

Even though deforestation was recognized as a major cause of global warming, at first only reforestation and afforestation projects qualified for carbon offset credits. While the existing, still standing, native forests did not. As you can imagine, this created a clear incentive for countries to destroy the world’s remaining rainforests — including all their immense biodiversity — and then replant new forests that were worth more in carbon funding.

Following this glaring oversight, a coalition of Tropical Forest Nations within the United Nations Framework Convention on Climate Change took steps to insert a provision for Avoided Deforestation, later becoming the Reduced Emissions from Deforestation and Degradation (REDD) program. While REDD and it’s offshoot REDD++ has come under considerable criticism by conservationists and indigenous peoples the world over, Costa Rica was one of the first countries to implement a voluntary REDD program that significantly exceeded early expectations for forest conservation. In the process, this addressed and resolved most major criticisms of REDD. They did this by rewarding good stewardship of the land, and making the program completely voluntary. Because small farms and the poor are targeted, this has also proven to be an effective anti-poverty intervention for the region.

Since the mid-1990’s, the PSA program has been funded primarily by a fossil-fuel energy and watershed tax. This money has been used to pay landowners of small forests, and they make money simply by not cutting down their trees. The environmental services that standing forests contribute to the country were addressed by simply giving an economic value to a tree standing. The exact value is assigned based on a balance four factors:
1. watershed protection
2. biodiversity conservation
3. scenic beauty
4. carbon sequestration

There are about 7,000 landowners enrolled in the PSA program today, with an average forest size of approximately 28 hectares (70 acres). Once a forest has been accepted into the program, the payments are distributed to the landowner for five consecutive years, with an option to extend for another five year term. As a result of this program, Costa Rica was able to stop and even reverse the destruction of its standing forests. In the last 30-years, they’ve recaptured a third of their land mass to forest cover, transitioning their economy from an unsustainable agricultural base to a flourishing eco-tourism economy.

Even though the self-funded portion of Costa Rica’s REDD program was already underway, Pax Natura introduced an option to extend funding outreach beyond Costa Rica’s boarders. We suggested taking the highly successful PSA program to the REDD carbon markets internationally. That’s when we formed a partnership with FONAFIFO, the Costa Rican government agency responsible for implementing and managing the PSA. Soon after, we began marketing Costa Rican REDD credits in North America, Latin America, the European Union and Asia. Largely as a result of our efforts, the Payment for Environmental Services protocol has been largely adopted by the coalition of rainforest nations. In 2015, REDD was officially integrated at COP-21 Summit in Paris. 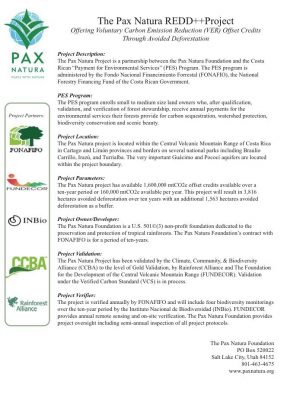 The Pax Natura Project was the first REDD project in the country to obtain Gold Level validation from The Climate Community and Biodiversity Alliance (CCBA) standard. This is the prestigious international organization that “identifies projects that simultaneously address climate change, support for local communities and small holders, and conserve biodiversity.” This highest level of validation was granted on 39,500 hectares (nearly 100,000 acres) of privately owned forest inside the Central Volcanic Range Conservation Area in Costa Rica.

This was a team effort, requiring tireless work and creativity from many players. Pax Natura remains a proud part of the team that has remained true to the spirit and the vision, and helped steward this program through political and bureaucratic challenges. We helped to turn Costa Rica’s successes from a local phenomenon to a global model, inspiring others to follow suit.