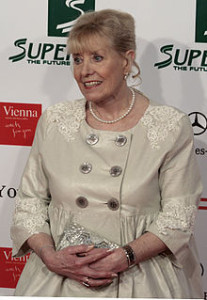 Betty Williams is a co-recipient with Mairead Corrigan of the Nobel Peace Prize in 1976 for her work as co-founder of Community of Peace People, an organization dedicated to promoting a peaceful resolution to the Northern Ireland conflict.  She serves on the Council of Honor for the United Nations University for Peace in Costa Rica, is a Patron for the International Peace Foundation in Vienna, and has been honored with the People’s Peace Prize of Norway; the Schweitzer Medallion for Courage; the Martin Luther King, Jr. Award; the Elenor Roosevelt Award; and the Frank Foundation Child Care International Oliver Award. Betty Williams heads the Global Children’s Foundation and is President of the World Centers of Compassion for Children International.  She is also the Chair of Institute for Asian Democracy in Washington D.C. and a Distinguished Visiting Professor at Nova Southeastern University.  In 2006, Williams was one of the founders of the Bobel Women’s Initiative, along with sister Nobel Peace Laureates Mairead Corrigan Maguire, Shirin Ebadi, Wangari Maathai, Jody Williams and Rigoberta Menchu Tum.