4 New Species Of Tiny Frogs Smaller Than A Fingernail

Four newly discovered frog species are so tiny that they can sit comfortably on a fingernail, making them some of the smallest-known frogs in the world.

Scientists said in a video that they were “surprised to find that the miniature forms are in fact locally abundant and fairly common.” The frogs likely escaped notice until now because of their tiny size and secretive habitats, hidden under damp soil or dense vegetation.

The team from the University of Delhi also found three other, larger species from the same genus of night frog, Nyctibatrachus, in a study published in PeerJ.

The largest of the seven frog species, Radcliffe’s Night Frog, comes in at about 38 mm, while the smallest, Robin Moore’s Night Frog, is some 12.4 mm. Take a look at how they measure up:

The researchers proved these are new species “by using an integrated taxonomic approach that included DNA studies, detailed morphological comparisons and bioacoustics.”

These frogs are also distinctive because of their insect-like calls, which sound a little like a cricket chirping — yet another reason why they might have been previously overlooked.

Researcher Sonali Garg, who is a doctoral student at the University of Delhi, explained in an interview with PeerJ how these miniature frogs differ from other night frogs:

“Unlike other large-sized frogs in the genus (up to 77 mm in length), which are adapted to live in forest streams, have large foot webbing and call loudly, the new miniature frogs have very different insect-like calls, lack webbing between toes and are found under damp leaf litter or in marshes.” 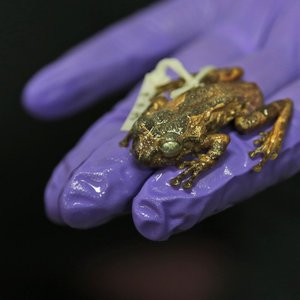 Taken together, the seven new species found in the Western Ghats Biodiversity Hotspot suggests that more species are likely to be found in the area. “The past decade has witnessed an exponential increase in the number of new amphibian species described from this region,” the researchers say. Some 159 new species were identified in the area between 2006-2015.

Night frogs are an “ancient group of frogs that diversified approximately 70-80 million years ago,” Garg said. The team’s findings mean a far higher number of the night frog genus are miniature than previously known.

“Previously, the Night Frog genus comprised of 28 recognized species of which only three were miniature sized,” the researchers stated. “Now the total number of known Nyctibatrachus species has increased to 35, of which 20 percent are diminutive in size.”

The newly discovered frogs all reside in small areas in the southern Western Ghats states of Kerala and Tamilnadu, Garg said. That may not bode well for them — the researchers say some of the habitats are in areas that are not protected.